MASTER
Home
About
Get There
Tickets

$20 General Admission tickets //  No reservations taken // Tables and/or chairs and seating is not guaranteed // Room is set up for a standing concert crowd.

All Ages Show!! All ages VIP!

“We wanted to show a different side and make a record that sounds like us,” Stephen Barker Liles says of Love and Theft’s boundary-pushing new album Whiskey On My Breath. “Country music has always been about honest performances and songs that mean something, and that’s the kind of record that we wanted to make.”

“We’re at a different place, in our music and in our lives, than we were when we made our earlier records, and we wanted this album to reflect that,” agrees his longstanding musical partner Eric Gunderson. “We worked harder and more passionately on this record than anything we’ve ever done. The whole experience was refreshing and inspiring for us.”

Whiskey On My Breath—the duo’s third album—marks a significant creative statement for the two singer-songwriter-guitarists, whose resume already includes a long series of career highlights. Having already established themselves as one of country’s hottest young acts with such memorable hits as the #1 country smash “Angel Eyes” and the Top 10 hit “Runaway,” and their widely acclaimed albums World Wide Open and Love and Theft, the ACM/CMA/CMT-nominated twosome take their music to the next level on Whiskey On My Breath.

The new collection finds the pair stripping their sound down to its essence, with spare, largely acoustic arrangements that focus squarely on their impassioned performances and distinctive vocal chemistry. With Liles and Gunderson co-producing with longtime studio collaborator Josh Leo (known for his work with the likes of Alabama, Restless Heart and Lynyrd Skynyrd), Whiskey On My Breath showcases the emotional honesty of such self-penned new tunes as the introspective title track and the pointedly personal “Everybody Drives Drunk,” along with such lighter-hearted new originals as “Easy,” and “Anytime, Anywhere,” which show Love and Theft’s playful sense of humor to be fully intact. Other highlights include “Get Drunk and Make Friends,” which the artists describe as the most honky-tonk song of their career, and “Wrong Baby Wrong,” a barbed Liles cowrite originally recorded in 2009 by Martina McBride and now reworked in fine style by its co-author.

Although it’s a departure in many respects, Whiskey On My Breath won’t come as that much of a surprise to Love and Theft’s longtime fans, who’ll recognize the commitment to high-energy performances and emotionally forthright songcraft that’s been the foundation of Love and Theft’s music from the start.

Originally a trio that also included fellow singer-songwriter Brian Bandas, Love and Theft first galvanized fans in 2009 with the Top 10 hit “Runaway.” That breakthrough success set the stage for their debut album World Wide Open, which also produced the hit single “Dancing In Circles.” After a move from the Disney-affiliated Carolwood label to RCA, Stephen and Eric scored their first #1 single with “Angel Eyes,” which was featured on Love and Theft’s self-titled second album, along with the hits “Runnin’ Out of Air” and “If You Ever Get Lonely.”

The longtime partners agree that their potent musical chemistry is a reflection of their personal rapport. “The thing about us,” Eric asserts,” is that we really are best friends, and that’s helped to get us through the tougher times. At the same time, though, we’re different enough personality-wise that the combination works. Stephen’s naturally a more social person than I am, and I’m a little more introverted. He tends to see the best in every person and every situation, and I’m kind of the opposite. My songwriting’s different from his, and when we’re in the studio, his approach is different from mine. The way we play guitar is different. The way we arrange songs is different. But our differences come together to make something that each of us couldn’t do on his own.”

The pair’s second-nature chemistry led them both to agree that the occasion of their third album called for the bold musical statement that Whiskey On My Breath would ultimately become.

“In some ways, we’ve played it safe in the past, and I think we’re over that now,” Stephen observes. “It’s easy to fall into that when you’re working in the Nashville system and trying to please everybody. But eventually you come around and realize that you need to be true to yourself. I don’t mind that songs like ‘Whiskey On My Breath’ and ‘Everybody Drives Drunk’ may be a little controversial, because they’re honest, and I think that they’ll make people think about how they feel about life.”

“Those songs are both really personal for us,” Eric notes. “They show a side of us that’s legitimately us, and how we’ve grown up and matured in the time that we’ve been in this business. But there are plenty of songs on this album that are just good, fun songs, and that’s still a side of us too.”

Indeed, Whiskey On My Breath makes it apparent how far the duo—who’ve both become husbands and fathers in the six years since they began their recording career—have traveled, and demonstrates that they’re in for the long haul.

“We feel more strongly about this record than anything we’ve ever done,” Eric concludes. “Whatever happens, we’ve made a record that we both love and that we can both stand behind, and that’s a great feeling.”

Julia’s music comes from a place deeper than her vocal chords and her songs come from the heart.  Specializing in everything from private/corporate events/weddings/entertainment to the intimate sharing of her own personal work, Julia will deliver from her own personal passion for communicating via music. 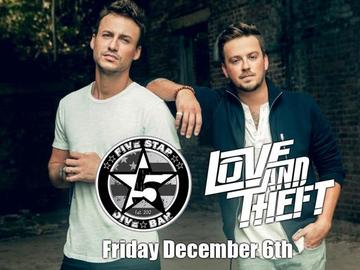 Tables and seating are NOT GUARANTEED

Most tickets will be standing room only for the duration of the performance.

other events by this organization